My teammate (Laetitia BONANNI) and I are working on a React Native module embedded in the 6Play application that aims to provide best moments of different TV shows from the M6 channel.

The module, called Refresh, is a list of videos that are playing while the user is scrolling. It also provides a “theater mode” which is a way to create an immersive user experience by obscuring the cards that are not focused:

As any other video application, it provides a fullscreen experience to the user by rotating the device.

At the time I’m writing this article, creating such a thing using React Native is a pain. Here’s the story why.

While being a web developer, we usually work with positioning to display something over the rest (like a popup for example).

Dealing with React Native and its style APIs (which really looks like the web one), we thought that it would be super-easy to simulate the exact same behaviour.

That’s why our main idea was to manage the fullscreen mode by adding a style that takes the screen size and an absolute position. Thus, the video would have followed the device edges while rotating:

React Native styles are not the same as the web ones

The idea of creating an almost equivalent API as the web one is really good for the learning curve of React Native. It is a real asset when you want to create simple user interfaces.

But there is a drawback. This approach makes us want to get the exact same result as we would have on the web.

In our case, the use of absolute positioning was sadly not working. In fact, it is written in the React Native documentation:

The fact that an element is always positioned relatively to its parent has been a problem for us since our player component is part of the list.

Overflow and android are not friends

And even if we would have found a way (we could have cheated by calculating negative values, relative to the parent, in order to stick to the edges of the device), we would have met other problems such as the fact the equivalent of overflow prop doesn’t work on Android.

There are actually multiple opened issues concerning this problem. Grabbou gave a shot on this one #7229:

Hopefully, we are working with native developers, from both platforms. We have shared a lot of information and finally have found a solution. 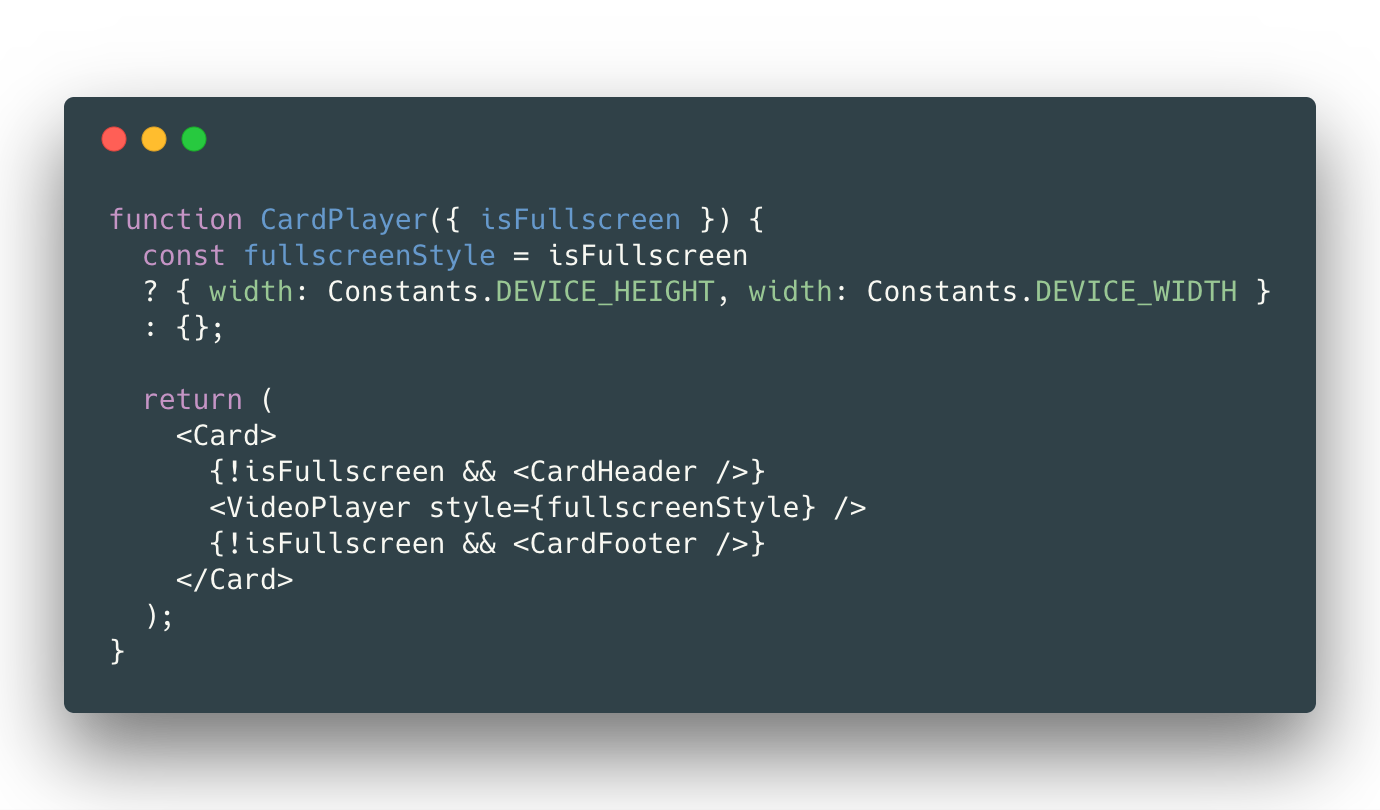 Here’s the result we have got:

What is happening on here?

There are multiple interesting things here, at ~200 cards down:

The first thing to know is that we only keep 5 players alive (2 above, the focused one, and 2 below) and otherwise we display images. It’s important because of memory. Without this limitation, the application would have thrown some OutOfMemory errors (we met this kind of problems with Bitmap objects).

The second thing to notice is that we are always playing the video that is the most centered on the screen.

The last thing to know is that we actually have multiple rendering cycles to hide the different components around the VideoPlayer.

For now, with that information, let’s imagine the following scenario:

During the 5th step, the list is scrolling up, because it has earned some space with the headers and footers disappearing. This creates the strange behaviour of “yo-yo” list scrolling. Moreover, when the list is scrolling, the application finds a new “most centered card”, and creates the associated player. If the previous player is not part of the 5 new conserved ones, it’s destroyed. Thus, the further we scroll in the list, the worse it becomes.

The combination of the 4th and 5th step creates the actual gray / blue screen in background.

For now, we have a quasi-functional solution. It’s not really user friendly but we have something close to work. The key point here is that improving the functional solution (avoid the “yo-yo” effect) would also give a better user experience.

So, how can we avoid this “yo-yo” behaviour ?

Portal to the rescue

Recently, we heard about React portals. It seems that it could have saved us from this specific situation. The idea is quite simple, we would have teleported the player from its current location to somewhere higher in the component tree, like the React Native documentation encourages us to, without triggering special state based rendering-cycles (aka: Headers + Footers removals):

The problem is that React Native doesn’t support them natively: portals are part of ReactDOM, not React itself. We can’t use it in our application.

We’ve found and experienced some great open source alternatives on the JavaScript side such as react-gateway and we even managed to create our own one for this specific case.

Each time we rotate the device, the video will restart from the beginning.

What can we do with portal ? On the native side?

The portal idea is quite interesting: we need to find a way to create a portal-like behaviour with React Native, but on the native side, so that we won’t lose the VideoPlayer native context.

Since we had the chance to be at the React Native Europe, we have learnt the way React Native is managing views thanks to Emile Sjolander.

To demonstrate this idea, let’s take an example :

This is a simple application which provides two

It seems that creating a portal-like behaviour is possible using ReactNative.

The main reason we didn’t choose this solution is the fact that we didn’t find a way to get the UIView native identifier from the JavaScript side (I’m not talking about nativeID or testID props, but the unique identifier of the view set on the native side).

Using this approach, we gain more control over what we would like to do leveraging native side power.

What does it mean?

In our context, it means that when the state isFullscreen is true, we are able to move the player from its current view to the higher one:

Here’s the result we’ve got:

It took us time to get this result, but we finally have something that meets our needs.

Link to the library : https://github.com/mfrachet/rn-reparentable